Our online service will be unavailable on Monday 21 September and Tuesday 22 September while we make some important updates. We will provide a new message here once the service is available again.

How to grow your choral audience – and bring communities together in song! 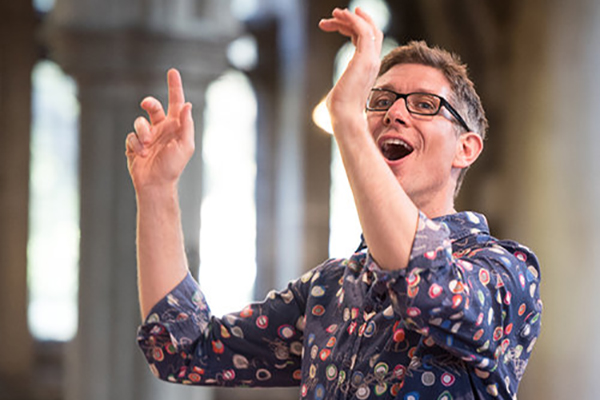 Choral composer and ABRSM jazz examiner Alexander L’Estrange shows how a creative and collaborative approach can bring the joys of choral singing to new participants and audiences.
Choral societies and community choirs across the UK are doing sterling work, with many new ones springing up all the time. However, with a few exceptions, they all face the same problem. No, I don’t mean the ‘where are all the tenors hiding?’ problem. I‘m talking about the challenge of bringing in sufficient and new audiences. Not just to enjoy the lovingly-rehearsed music but, in buying tickets, to help pay for the vocal scores, the professional conductor and soloists, the venue hire, the accompanist, the raked staging, the orchestra (if you’re lucky), the website, the publicity machine … oh, and those custard cream biscuits and tea bags don’t pay for themselves either.

From a wonderful idea

This was the very problem that Dorking Choral Society approached me with nine years ago, when they commissioned me to write Zimbe! Come sing the songs of Africa. They had a rather wonderful idea, one that I have since adopted for all of my large-scale choral works, namely to combine forces with children from local primary schools, thereby creating a new musical texture of young unison voices singing alongside adult or teenage SATB choirs.

Not only does this create an extremely pleasing and musically satisfying soundscape, but the added benefits are manifold, both for the schoolchildren and for the adult choir(s). The school choir has the exciting experience of moving out of its familiar milieu – be it classroom, school hall or wherever – and into the community, into a large, different, exciting venue such as a local church, cathedral, theatre or town hall. As for the choral society, it has an instant new audience to buy tickets and come to their concert: the parents, families and friends of the schoolchildren.
A further benefit is that this new audience of parents (and grandparents) is introduced to or reminded of the joys of choral singing. What a golden opportunity for choral societies and community choirs to recruit new singers and add to their membership!
A few striking case studies of how successful  collaborations like these can be for everyone involved helps to illustrate the point.

In 2012, Hampshire Music Service, Winchester College, Hampshire Youth Choir, hundreds of kids from local primary schools and several adult community choirs congregated in Winchester Cathedral for  that was, at the time, the largest ever performance of Zimbe!, my African/gospel-inspired cantata. Nearly 500 performers took part and with the huge, stunning cathedral as a venue it was a sell-out.
Perhaps even more pleasing was that one of the adult choirs, Alresford Community Choir, which had specially formed for the event and predominantly comprised singers who’d never even sung in a choir before, loved the experience so much they decided to stay together. They put on not one but two further Zimbe! performances of their own that year, involving yet more youngsters from their village primary schools and reaching out to an even larger audience. The choir has gone from strength to strength and it has been a pleasure to bring my band, the Call Me Al Quintet, to perform with them on a number of occasions.

After Zimbe!, which has now had over 200 performances all over the world, I wrote Ahoy! Sing for the Mary Rose! – also scored for SATB, unison children’s choir and jazz quintet. Whereas in Zimbe! I’d  created a fusion of African, gospel and jazz, Ahoy! combines sea shanties, original music and Tudor melodies associated with England’s most famous musical king, Henry VIII.
The forces for the 2013 premiere of this piece were also huge. It was commissioned by Portsmouth Grammar School along with the Mary Rose Museum and they, together with a local Festival Chorus, formed the bulk of the SATB choir. The unison children’s part was sung by many hundreds of local Portsmouth primary school children, including some with special educational needs from the aptly-named Mary Rose Academy. This coming together and resource sharing of independent and state sectors was just one of the many delights of Ahoy!

The creation and first performance of Zadok Rules - Hallelujah! was similarly exciting, involving a vast number of singers of all ages within the beautiful and striking venue of Arundel Cathedral. To mark the 60th anniversary of the Queen’s coronation, I was commissioned by Baroque orchestra the Hanover Band to carry out a series of workshops at primary schools across the South Downs Way. This would culminate in bringing all the children together with the professional players of the Hanover Band, a cathedral choir, a county youth choir and an adult community choir for an unforgettable first performance. The music draws on famous classics by Handel (Zadok the Priest and the Hallelujah Chorus) as well as Rule Britannia, the national anthem and others. It also features (to Handel’s Maccabeus hymn tune) a doggerel poem I had fun reconstructing to list all the monarchs of this country since ‘William the Conk’: Start with the Normans - Willy, Willy, Henry, Stee, Henry II was a Plantagenet; Dick, John, Henry Three …

The next work I wrote for these forces is a musical celebration of the bicycle – Song Cycle: vive la vélorution! (see what I did there?) – which was commissioned for the start of the Tour de France in Yorkshire in 2014. Although the world premiere in York Minster was for massed SATB chorus and jazz quintet, with adult community choirs coming together from across the route of what is now the Tour de Yorkshire, I have since added a part for unison children. To my delight, performances of Song Cycle are now taking off around the country with hundreds of children having the chance to sing Daisy, Daisy (as a jazz waltz!) in large venues, often with their parents, teachers or grandparents singing in the choir behind them.

Perhaps the most exciting project of them all has been the recent relationship with a group of over 50 schools of different types, sizes and ages, all under the United Learning umbrella. From a minster school, to schools where there is no music teacher and no singing, to schools with pupils in the National Youth Choir, thousands of children and teenagers joined forces, first in London’s Lyceum Theatre (home of The Lion King) for a huge Zimbe! and then at Christmas for Wassail! Carols of Comfort and Joy, an award-winning celebration of sacred and secular folk carols and winter songs.
Children from across the south of England came together at Southwark Cathedral for the premiere, with Manchester’s impressive RNCM Concert Hall the venue for a second performance the very next night. As one 13-year-old put it, ‘no matter where you are from, music is a language you can all join in with’.

To raise funds and bring in new singers – remember those tenors we were looking for earlier? – dozens of choirs have run ‘come and sing’ days where I introduce one of the works to the choral society and to children. Crucially, parents, teachers and members of other local choirs are invited to the event – often on a Saturday or Sunday. These visitors find their appetites are whetted not only for attending the concert but, in some cases, also for joining a choir themselves.

In summary, one of the great joys of writing and then being involved in performances of Zimbe!, Ahoy!, Zadok, Song Cycle and Wassail! has been to see choral societies, schools and choirs of all ages fostering  links with other community groups in their area and growing their concert audiences. I am also so happy for the thousands (probably tens of thousands) of primary school children who have had the chance to sing joyful, groove-based music in large, exciting venues. Venues that they might otherwise never have visited, let alone performed in to sell-out audiences.

The value of seeing others singing

Finally, I believe it’s crucial for young children to see other people (older kids and adults) singing. It helps them to realise that singing isn’t just something you do at school on a Thursday lunchtime because you’re told to’, but something you can enjoy and share with others for the rest of your life. As the Elizabethan composer William Byrd said so wonderfully: ‘Since singing is so good a thing, I wish all men would learn to sing.’
Alexander L’Estrange is an English choral composer and arranger. His music combines his background in the English choral tradition with his love for jazz harmonies and groove. He is also an ABRSM jazz examiner. Alexander’s choral music is published by Faber Music. Find out more at alexanderlestrange.com.
Back to listing