A new youth orchestra has been created in Dubai that seeks to bridge the east-west cultural divide. Paul Cutts finds out more. Anyone who has sung in a choir or played in an orchestra knows how music can unite people of different backgrounds and beliefs. So it's arguably no coincidence that – at a time of global political tension – a number of musical ensembles have emerged that aim to bridge cultural divides. Daniel Barenboim's West-Eastern Divan Orchestra is perhaps the best-known example, bringing together young Israeli, Palestinian and other Arab musicians to play classical music. Last year Zuhal Sultan, then a 17-year-old pianist, generated international headlines when she launched a national youth orchestra in her native Iraq. Just as Zuhal was unveiling her brave venture, another ensemble had quietly taken shape 850 miles away. The Youth Orchestra of the Middle East (YOME) was the brainchild of Christine Titterington and Marco Zambonini. Christine is a graduate of the Royal Academy of Music and former professional musician. She relocated to Dubai when her husband Alan Moore moved his financial services company HQ to the United Arab Emirates. 'My background is music,' explains Christine, 'and I came up through Kent Youth Orchestra. When we arrived in Dubai there was nothing here in terms of a youth orchestra, although there is a large expatriot community in the region whose children play instruments in school orchestras, as well as Emiratis.' Together with Marco Zambonini, head of music at Dubai College, Christine decided to create a new ensemble, one 'modelled on the western youth orchestra but that had the unifying concept of introducing western musicians to classical Arabic music as well as Arab nationals to western music.' 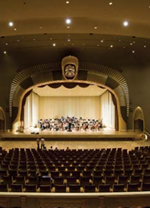 Among the most influential supporters of the orchestra concept is Her Highness Sheikha Manal bint Mohammed bin Rashid Al Maktoum. The wife of Dubai's Deputy Prime Minister and a member of Dubai's ruling family, her decision to become the patron of YOME delighted the orchestra's founders. 'We are very honoured to have the royal patronage of Sheikha Manal,' enthuses Christine. 'She is very pro-culture, pro-youth, pro-arts and music.' 'Our patron is very keen that Arabic students have this opportunity,' she adds, 'and we're keen to introduce western students to Arabic music concepts.' With royal backing and financial support from Alan's company, Chescor Capital, Christine set about shaping the youth orchestra's first gathering in early 2009. Calling on her UK connections, she secured the services of conductor Peter Currie and cellist Philip Taylor (a contemporary from her student days) to help deliver a spring course and concerts for 60 students. Peter has a national reputation for his work with young musicians and is director of Surrey County Youth Orchestra. He was determined that YOME 'was going to perform real music to the best of its ability' from the outset and brought along some of his own musicians from the Home Counties to bolster numbers and offer support and leadership for the Middle East-based players. 'Our vision was to get something up and running along the model of what we do in the UK,' Peter explains. 'We got local teachers on side to provide the best young people to perform. We were actually very nervous at the start,' he admits, 'but within about 45 seconds of trying out Delibes' Le roi s'amuse I knew it was going to be fine and the nerves went away.' Peter sees YOME as a genuine fusion of 'the Middle-Eastern and ex-patriot communities and cultures coming together. It's about showing how young people can come together in any environment, make very special relationships and thrive outside of the academic education environment. Dubai suffers from the transient aspects of the ex-pat community. People come and go all the time. We had a small core of musicians, much smaller than you would expect of a typical county youth orchestra in the UK. But last year was still a revelation.' Cello tutor Philip Taylor agrees: 'I was sceptical initially, as the young musicians were of such varying standards and none of the kids (except the ones from Surrey) had played in a youth orchestra before. There was a whole orchestral language they needed to understand.' But Peter knew exactly what would work and to watch the kids grow into this orchestra was very exciting. ‘It was great to be able to give additional support,' Philip continues. 'There are very few luthiers in the Middle East and one girl's cello was in such a bad state of repair that she couldn't understand why she couldn't play certain things on the instrument. It was nice to be able to offer advice.' With a successful year behind them, the YOME team has even bigger ambitions for 2010. 'ABRSM is helping us to spread the word,' says Christine. 'Its Representatives in 27 Middle-Eastern destinations have let people know about YOME and advertised it in all regional exam rooms. But we have a long-term vision: we really want to build more cross-cultural understanding and links with Arab orchestras, and we want up to 100 students this year. 'We have also commissioned a new piece by Rob Szymanek, a composer from the Royal Academy of Music. He’s put together a piece that is playable by the western symphony orchestra but features rhythms and sounds of Arabic music. Much of his creative focus is on crossing and reworking cultural boundaries in music. Entitled Fatma’s Journey, it explores the bringing together of Arabic and Western cultures through classical music. The first part is devoted to melodies and rhythms usually heard on Arabic instruments such as the oud, and the second part on musical styles from Europe. The final section brings together these two strands in a majestic celebration of the different styles of music and culture. We are delighted to have an Emirati boy performing on the oud with the orchestra for its world premiere. 'Ultimately,' Christine concludes, 'it's about seeing everyone come together to make music.'

This article was originally featured in the May 2010 edition of Libretto, ABRSM's magazine.