Violin Star is an innovative series of illustrated repertoire books with CDs for beginner violinists. Here Violin Star composer and arranger Edward Huws Jones shares his experiences of working on this exciting new resource and highlights some of its key features. When the idea of a brand-new series of early years violin books was originally discussed, the first question had to be ‘why?’ There are lots of beginner violin books out there and any violin teacher can reel off a list of at least half a dozen which they know fairly well. In fact, many teachers dip into several different books and methods, taking ideas and materials from each. But this bespoke approach simply highlights the need for a new series, one that brings together, as much as possible, the music and approach we require. Providing such a series was to be the challenge for Violin Star. The three levels of Violin Star take students from the first stages of playing through to around Grade 2. In establishing the technical progression for the series we looked for the common ground between a wide range of books and methods. What is innovative and unusual is the number and variety of pieces for each technical step. For example, in Violin Star 1 there are 17 open-string pieces before we start to introduce the left hand. With such a wide choice on offer, not every student will play every piece: teachers and students can select according to their needs, speed of progress and musical taste. Violin Star features both arrangements and original compositions, with many of the latter shaped by the need to cover particular technical challenges. ‘Ukulele Sam’ in Violin Star 2 is the first piece in ‘second finger pattern’ (first and second finger close); its idiosyncratic harmonic progression enables us to sample the finger pattern on three different strings. In another instance, one of my colleagues said ‘I need a piece where the first finger moves between B natural and B flat on the A string’, and this became the inspiration for ‘Haley’s Comet’ in Violin Star 3. 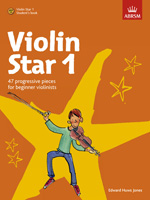 The idea of exploring different musical styles is at the heart of Violin Star. We set out to create an eclectic mix of idioms, from Western Classical to folk, from rock and pop to world music. The last group, which includes authentic melodies from South India, China and South Africa, provides some of the most exciting new repertoire in the series. About a third of the pieces are original compositions. It was fun to write some funky rock pieces (for the violin, of all instruments!) and to see the enthusiasm with which the students received them. ‘Too Much Rosin!’, for example, has more than a hint of the Kaiser Chiefs (our local Leeds band made good – and more than one student has recognised the left-handed guitarist with the beanie hat in the Violin Star 1 illustration). Throughout the time I was working on Violin Star I still had my day job as a peripatetic violin teacher with the North Yorkshire Music Service, and I was able to try out all the material on my students (most of them taught in groups) as we went along. So there was nothing of the composer-in-a-garret about this process, or the ivory tower of an elite private teaching practice; pieces would either sink or swim. And some of them did sink. When we tried out the first draft of my arrangement of Pachelbel’s Canon one articulate Year 5 student described it as ‘a random collection of notes’; so back to the drawing board with that one! But in the end all the pieces passed the test – some with the ultimate accolade of requests to play it next week in assembly. Trying the pieces out at school, we gradually developed supporting activities: games, improvisation and technical exercises. Some of these (with their distinctive ‘Activity’ tag) are to be found dotted around the books and teachers can use them, ignore them or develop their own. All the pieces have three alternative forms of accompaniment. There are separate piano and violin accompaniments in the Accompaniment books and play-along tracks on the CDs that come with the Student’s books. The violin accompaniments are an important and innovatory feature of the series. Not all violin teachers are confident pianists, and many of us have to work in rooms which don’t have a piano or keyboard. Violin accompaniment has enormous advantages – you face the students (rather than the wall) and the teacher’s playing helps to make the whole experience more engaging and interactive. The lesson becomes a celebration of the violin – a violin party! Taking the piano accompaniments as their springboard, the arrangers working on the play-along tracks, Stuart Briner, John Maul, Frank Mizen and Chris Norton, have recreated an extraordinary diversity of sounds and styles. Most of the folk and rock tracks were engineered by Frank, an audio genius who insists on adding his own live guitars – and banjo, ukulele and bouzouki. In contrast, Stuart is a wizard of rich orchestral sonorities. His rendering of ‘Caribbean Moonlight’, while it may not feature Johnny Depp, certainly has the right lush big-screen sound. The CDs also include a full performance of every piece, with the student’s violin line sensitively realised by the distinguished violinist and teacher Alexandra Wood. It took time to find the right illustrator, but Mark Beech’s wonderful pictures, combined with fresh design input from Kate Benjamin, make the books a feast for the eye as well as the ear. One of my favourite illustrations from Violin Star 1 shows William Tell perched in a tree, alongside the woodpecker from its companion piece, ‘Woodpecker Tap’. I also particularly like the two Scottish and Welsh teenagers high-fiving across their facing pages in Violin Star 3. Violin Star has been, as you can see, very much a team effort, and the creative ideas, experience and patience of all involved are present on every page of the series. To return to the question ‘why another violin book?’, one of the most persuasive, and simplest, reasons is surely our appetite for new material. We all know the deadening effect of going over the same beginner tunes year in, year out. Hard-pressed teachers are always on the lookout for new and exciting pieces to motivate themselves as well as their students. We have to keep refreshing the teaching repertoire and that is ultimately what Violin Star is all about.

Edward Huws Jones is a composer, arranger and music educationalist. He studied at the University of York and the Royal Academy of Music, and went on to develop extensive experience as a string teacher. He has travelled widely to research fiddle-playing styles, and his original compositions are firmly established in the educational repertoire.

This article was originally featured in the September 2011 edition of Libretto, ABRSM's magazine.